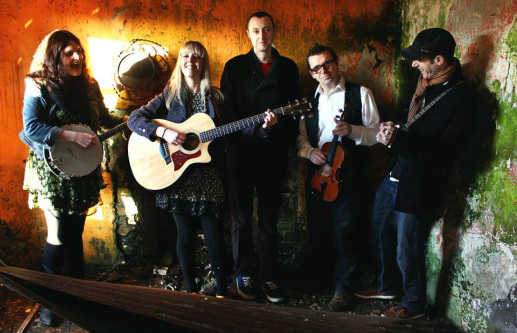 The Dandy Horses hail from Belfast, and are nearly as quirky as the vintage bicycle they share a name with. Formed in 2012, the folky five-piece take delight in swapping banjo, whistles, and guitars; with mandolin, bouzouki and fiddle. To make matters worse, Joanne Cassidy (vocals/guitar/tinwhistles/banjo) and Noeleen Cosgrove (vocals, guitar, fiddle, banjo) insist that all band members sing harmonies, with male members at risk of serious repercussions should any notes go astray.  Sean Quinn (vocals/mandolin/bouzouki/banjo) had no choice but to team up with Rodney McKinney (double bassist and peacemaker) to avoid murder on the dandy horse dance floor.  Meanwhile, you might catch Marty Malone (drummer) throwing drumsticks in protest at crimes against rhythm and time...and having general fun times!

Tom Robinson (BBC 6music) likes The Dandy Horses. So does Ralph McLean (BBC Radio Ulster) and Carolyn Stewart (U105 FM) With significant airplay for the eponymous EP released in 2012, and ‘Hat on the Sun’ (2014) ; the band achieved success by selling out the Black Box in Belfast with the launch of the latter EP in March 2014.  With harmonies perfected (almost) and timing issues forgiven, (or forgotten?) the band toured the North and South of Ireland at various festivals and venues following the release of ‘Hat on the Sun.’ Here is what people have been saying about the contemporary folk sounds of The Dandy Horses :

' With BBC6 Music's Tom Robinson giving them airplay you know you've discovered a band that are going to be around for a while and keep on delivering'…....The Dandy Horses summon the spirit of early Fleetwood Mac and Sandy Denny era Fairport convention and look set to ride off into the sunset '(Gerry McNally, Folk and Tumble, August 2014)


﻿'This is my new favourite EP…there, I said it. The sophomore offering from The Dandy Horses is flawless. This summery collection of tracks transports the listener to summer nights under blankets of stars through their playful sophistication of musicianship and lyric. This entire EP is utterly charming…(Noelle Ellis, Gigging NI)

'The multi-instrumentalism of the band is showcased beautifully….The whole EP reeks of summer with a promise of good times., all rolled up in the Dandy’s Americana/country/folk good time sound. The Dandy horses build their songs on a strong foundation of sweet memorable melody and great lyrics’ (Mark Reid, Creative Voices NI)

‘As soon as I heard the CD, I had to have you guys on the show’ (John Toal, BBC Radio Ulster)

‘The Dandy Horses are really coming into their own with the launch of their new EP’ (John McGurk, Sunday Life, March 2014, pick of ‘What’s on’ gig guide NI)